On the passing of William F. Buckley

I was listening to NPR on my way home from work today, and I heard this report on the death of William F. Buckley.

First, I have to comment on this response by Buckley's hand-picked replacement to head up his magazine, The National Review - Rich "Right, but never Correct" Lowry:

Buckley was, Lowry said, "an Ivy League-educated, silver-tongued, witty and erudite guy who could take on all comers — and he had just an incalculable influence."

This is perhaps what Lowry intended to say, but due to his inability to pronounce multisyllabic words correctly (and I'm not joking), he said "eriudite" and "incalcable" influence.

The part of the story that blew my mind was from his biographer, but that part of the story is not part of the audio at npr.com (not sure why). The essential gist of the biographer's comments (and I wish I could remember his name) were that Buckley had a genius for friendship, and never talked about politics unless he was getting paid to do so. He stated quite plainly that Buckley didn't care about politics and thought it was boring.

He didn't care. He didn't care. He founded the Young Americans for Freedom, he started a magazine trying to make conservatism respectable, said that people with AIDS should get tattooed so we can identify them, and fought against every step of the civil rights movement (a position he later regretted, although I take that with a grain of salt.) And he didn't care. Banality of evil, my friends.

The good news, though, is that according to his son Christopher:

He drove out the kooks of the movement. He separated it from the anti-Semites, the isolationists, the John Birchers. He conducted, if you will, a kind of purging of the movement.

Thank goodness there are no more kooks, anti-Semites, isolationists or John Birchers (scroll down the the Notable Members section: Ronald Reagan was a member of the Beverly Hills branch!) amongst the conservative movement anymore! Thanks, Mr. Buckley!
Posted by maurinsky at 9:25 PM 2 comments:

I finished my first draft of the script for Monkey's talent show. The theme that the organizer of the show decided on was Award Show/Red Carpet, so I did a mock awards show that includes a parody of a nominated TV show and a nominated movie. My favorite part of the script is the Are You Smarter Than A 5th Grader? section:

MC3: Now let’s see a scene from one of the shows nominated for Favorite TV Show: Are You Smarter Than A 5th Grader?

Jeff Foxworthy: Okay, our contestant Dr. Alexander Andopolis, BS, MA, PhD, MD, DDS, RSVP is about to select the category for the $500,000 question. Dr. Andopolis, your partner is _________. There is only one subject on the board, 1st Grade Math
Dr. AA: Jeff, as you know, I have advanced degrees in Medicine, Dentistry, Psychiatry, and Etiquette. What you may not realize is that my Bachelor's degree is in Math, so I am confident that I can solve a first grade math question.

Posted by maurinsky at 12:58 AM No comments:

My friend Sarah Callinan, who is a delightful and incredibly talented soprano, has a gorgeous new website all about her gorgeous self. Please check it out.
Posted by maurinsky at 11:19 AM No comments:

The most terrifying two words in the English language*

I would write more, but I have to go curl up in the fetal position and whimper.

*aside from (all the gods of the ages forbid) President Cheney.
Posted by maurinsky at 11:16 PM No comments:

Last night, Loki and I were hanging out at Barnes & Noble, and I picked up a book called Paris, Then and Now . It was only 2 years ago that we went to Ireland and Paris for February vacation.

That trip started out as a family trip to the Grand Canyon, but vastly cheaper airfares to Europe made the trip eastward more desirable. It was a life changing trip for Loki, Sio and Monkey, all of whom declared that there was no place in the world they would rather be than Ireland.

I loved Ireland, but I was completely swept off of my feet by Paris, even though it was ridiculously cold and a cite d'escalier, not very friendly for gimpy folks like me. Paris was a place I could see myself living, everything you need just outside your door.

The book was kind of neat, as it juxtaposed two pictures of the same location, one from the past, one from the present. I was pleased to see 2 shots of the area we stayed in in the Latin Quarter, on the Passage des Postes off of Rue Mouffetard, as well as a shot of Rue Lepic, where we stayed in Montmartre. 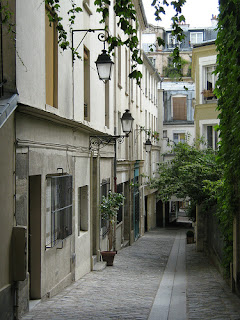 Loki and I will make it back there at some point, preferably in nicer weather. I just have to figure out how to get rich, and quick.
Posted by maurinsky at 11:11 PM No comments:

Video of my a cappella group

Posted by maurinsky at 11:40 AM No comments:

I already put a response in the comments at konagod, but since the lovely Deborah Lipp has tagged me, I will pick another one of of the many, many books that are near the computer.

"I liked the informal style of it, too. I crossed London in the morning on the rickety old Metropolitan Line and came out into the street market at Goldhawk Road and went round the corner to an ordinary looking house with a front garden, which was the office. I had splendidly bizarre clients."

Here's the book I used.

Now for the tagging: I tag Hazel, Toast, John Howard, Kirk and Kathleen.
Posted by maurinsky at 12:52 AM No comments:

Oh, Turner Classic Movies, you're the only channel I ever loved

It's Oscar Month on Turner Classic Movies, and I've been recording and watching up a storm.

1. An American In Paris

What I like about this movie is that it is 2/3s of a typical romantic musical comedy, and 1/3 surreal and/or ballet. Set to great Gershwin tunes. 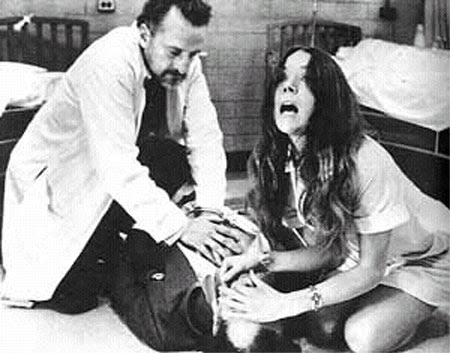 Script by Chayefsky and a bravura performance by George C. Scott. The middle section of the movie features a monologue, essentially, for Scott, and he had my heart pounding. He plays Doctor Bock, a man who is about to commit suicide, feeling hopeless about what is happening in his hospital and in his life. The end of the monologue is disturbing as he sexually attacks Diana Rigg, the daughter of a patient, after she has propositioned him and he initially rejected her. Darkly satiric and prescient about the business of medicine.

Believe it or not, I had never seen this movie from beginning to end. I love a good morally ambiguous character, and here we have them all over the place: Rick, who can't help but help out a gambler who is in over his head, but refuses to get involved in the larger issues; Captain Renault, who cheerfully fraternizes and supports the Nazis but still comes through in the end; Ilsa Lund, who is married to Mr. Perfect but has an affair with Rick while Mr. Perfect is in a concentration camp! You know this already, I loved it, although the dialog definitely sounds a bit cheesier having been parodied and copied a thousand times.

This is another one I'd never seen, and now it's another one I could watch over and over again when I'm feeling in the mood for something perfectly romantic. Of course, Emma Thompson, Kate Winslet and Alan Rickman are all fantastic; Hugh Grant was completely in stuttery mode, but adorable. But my favorite moments by far in the movie were when Hugh Laurie was on screen, especially when Imelda Staunton, who played his wife, was chattering away. He was thoroughly unpleasant, and I found it delightful.


Also watched: Seven Brides of Seven Brothers - hurts my feminist head, but I love that barn raising dance scene, Howard Keel's magnificent voice and presence, Tommy Rall and Russ Tamblyn. Anchors Aweigh - kind of boring and enough already about Jose Iturbi! but it did have a very adorable Dean Stockwell and Rags Ragland, one of my favorite "hey, it's that guy!" guys.
Posted by maurinsky at 12:05 AM No comments:

My actual new project is a creative writing project for Monkey's school, but I'm also thinking about working on a graphic novel. I have these funny little visuals that pop into my head, and I think they might best be conveyed in graphic novel form. It might be just for me, but I'm going to get out my pencil and a sketchpad and start drawing.
Posted by maurinsky at 10:05 PM No comments:

Yeah, you read that right.

Hat tip to the lovely and Bond-eriffic Deborah at Property of a Lady. That's a woman with good taste, my friends.
Posted by maurinsky at 3:18 PM No comments:

I was on the radio today

I had a doctor's appointment today (no bronchitis, just reactive airways responding to congestion), and on the way down I turned on the radio, and the station was tuned to WAMC, which is an NPR station out of Albany. The show was Vox Pop, hosted by Dr. Alan Chartock (I have to check that spelling), and his guest was NY state Republican Assemblyman/Minority Leader James Tidesco. The subject was discussion of the results of Super Tuesday.

I happened to tune in right in the middle of a commenter who talked about how radical the Republican party has gotten, and Tidesco kind of pissed me off by talking about how both parties has their wingnuts. Since it's a 20 minute ride to my doctor, I dialed in and waited on hold through several digressions into the Iraq War.

Right before they picked up my call, another woman called in to talk about what I wanted to talk about, which is that the Republican party is no longer a hospitable place for moderates. I felt I did pretty well in responding to Assemblyman Tidesco, but as soon as I was done talking, I had to go into the doctor's office, so I don't know if he badmouthed me after I got off the phone or just kept spinning about McCain being a moderate.

You can listen here I'm Maureen from Hartford.
Posted by maurinsky at 4:13 PM No comments:
Labels: I'm sick so I don't usually sound like that, moderates, radical, radio, republicans

I think my cough is morphing into bronchitis. I can feel the tightness in my chest.

I'm concerned, because shortly after the first time I had bronchitis (when I was about 12), I started having asthma attacks. I had them until Sio was about 3 or 4. The last time I had an asthma attack, I had to use one of those mist machines to bring my oxygen levels back up. Then the doctor gave me a combination of steroids and an inhaler that made me feel paranoid and anxious. I felt so horrible that I stopped taking them.

And oddly enough, my asthma went into remission after that.

Well, even though the timing is awful (hugely busy week at work ahead), I have no choice now, I have to go to the doctor tomorrow.
Posted by maurinsky at 10:42 PM No comments:
Newer Posts Older Posts Home
Subscribe to: Posts (Atom)