It went okay. I took Minstrel Boy's advice (since I have absolute trust in his judgement on music), and they really enjoyed the song. I was a little shaky from nerves when I sang it, which I hope they will spot me.

We also did some exercises. I could tell they were impressed with how low I can sing (B below the C below middle C - impressed eyebrows were raised, I still have resonance that low, provided I'm not too warmed up). I sang in close harmony with one of the members; I thought it sounded good, I listened to her and adjusted to her dynamics, and I had no problem keeping my part accurate.

They said they will have a callback next Monday, so I have another round ahead of me. Thanks everyone for your input on which song to sing.
Posted by maurinsky at 11:15 PM No comments:

...and the double chin, please*, and vote (in the comments) for which of the two songs below you prefer. I have an audition coming up and I'm trying to figure out what song to sing.

(Be aware: I am singing these songs at approximately 7:30 a.m., I'm not even a little bit warmed up, and I'm sitting down so my breath support is not all it could be. I just wanted to hear myself singing each song so I determine which one I like better.)

*I am occasionally impressed by the vast swath of real estate on my face. I had a huge head when I was a kid, and it seems to get bigger with each passing year. Maybe it's an Irish-American thing...Alec Baldwin and Teddy Kennedy also have ginormous heads.
Posted by maurinsky at 9:20 PM No comments: 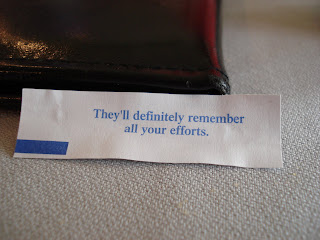 Posted by maurinsky at 7:01 PM No comments:

As I mentioned in my post about The Mist below, I have signed up for Pay Per Post. I found out about this from a friend of mine on a message board, and I was initially reluctant. I've been to home parties before (for those of you who don't know: Tupperware, Princess House, PartyLite, Pampered Chef, etc., etc., etc.), and I always thought to myself "I could never have people over my house just to ask them to buy stuff."

I decided to do this after tallying up my debt level, and realizing that I need to make more money. I am working on cutting back our budget at home, but in the meantime, I'm trying to bring home as much money as I possibly can. So now I'm thinking "yeah, if I have to, I'll invite people over my house just to ask them to buy stuff."

Not that I'm asking anyone to buy stuff. Pay Per Post asks you to take "opportunities" to talk about particular subjects on your blog. Some of the sponsors are asking for a positive review; some are just trying to create buzz, so any discussion at all is sought. They do require that you disclose your association with Pay Per Post when you have a post up that was inspired by a PPP opportunity

The Mist was an easy one for me - it's a story I enjoyed and a movie I don't mind talking about. I'm interested in it.

I hope I can find more such opportunities, because I need the cash!

My promise to you, my sporadic and quiet and occasionally invisible and non-existent readers, is that I will always be honest and upfront about any Pay Per Post posts. I apologize for having what are essentially advertisements as blog content, but I hope you will understand that my financial situation requires drastic measures.

Today was my first day singing for the Catholics. Our tenor section leader laughed when he discovered not a single man could sing the tune when we sang in unison.

I laughed when I discovered the name of the priest who performs at the Mass just before ours is named Father Ted.

Posted by maurinsky at 10:26 PM No comments:

When I read the Stephen King novella "The Mist", I immediately visualized it in my mind, and thought it would be a great movie. Many, many years later, it's about to come out in the theaters.

The Mist by Stephen King

If you aren't familiar with the story, it takes place in a small town in Maine (of course). It's the day after a big storm, and a strange mist is rolling across the lake. The protagonist of the story is David Drayton, an artist, who gets trapped at the local grocery store with his five year old son.

A mix of locals and seasonal residents are trapped with him, including one Mrs. Carmody, a fanatical religious nutjob who (in the novella, anyway) seems to take great delight that the End Times Are Upon Us - she takes this disaster as evidence that God has come down to smite the wicked.

I always imagined Piper Laurie as Mrs. Carmody (probably the influence of another Stephen King movie, Carrie), but Marcia Gay Harden can definitely do that New England whackadoo type. Although this is also making me think that Kathy Bates would have been completely awesome as Mrs. Carmody.

I loved this novella, in part because I think Stephen King is at his best when he is at his briefest. I've always enjoyed his short stories more than his novels (even though I've enjoyed his novels - some of them more than others, but...). I'm sure that the movie won't be as good as the book, because it never is, and the book was exceptionally vivid in the mental picture it created - in my mind, at least.

I'm looking forward to seeing the movie - I know that filmed versions of King's stories can be fantastic (Stand By Me, The Shawshank Redemption, Misery), but they can also be terrible (Christine, Cujo)

Also: Laughing Wild is selling out! In my quest to improve my bottom line, I've signed up for Pay Per Post. See below for opportunities to review this post and a disclosure of my association with Pay Per Post.

Posted by maurinsky at 11:18 AM No comments:

Tonight was my last rehearsal for my church gig.

Rev. Right Wing has mandated that the choir directors lose the classical repertoire, set up bleachers in the front for the choir, hire a guitarist and drummer, and perform only Contemporary Christian music (aka: religious music for people who hate music) from now on.

As a response, the choir directors quit.

I'm bummed. It was a good gig. I learned so much from the choir directors, and from my fellow singers. We sang some great music - tonight's rehearsal was basically us singing choir favorites: What Sweeter Music, Biebl's Ave Maria, Greater Love Hath No Man - and had fun. We had our little inside jokes - anyone picking up old copies of my music will occasionally come across a Pi sign, or a Julie Andrews The or a Carol Burnett or a Lawrence Welk.

When I started singing there 6 years ago, I had a good ear, but poor sight reading skills. Now I'm confident at sight-reading, have an even better ear, and can tell a G# from an A.

But all is not over for me. The choir directors are going to a new church, and I'm going with them. It's going to be very different for us - the new church has a much less experienced choir, and it's a Catholic church, which will of course be familiar to me, if not welcome. So I'll still be collecting a paycheck. I'll miss what we had, though.
Posted by maurinsky at 12:18 AM No comments:
Newer Posts Older Posts Home
Subscribe to: Posts (Atom)