and feeling flushed with success.

After getting some wildly different advice from a number of people about my leek seeds, I was convinced I had killed them. I kept watching for any sign of life from the little cups of earth, but nothing showed up.

Tonight, though....tonight I checked on my cups of dirt and saw a tiny shoot of green. And another and another. 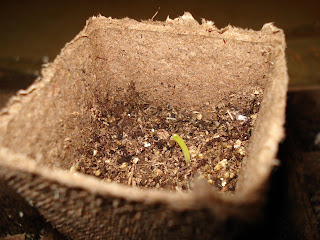 I did not kill my leeks! They are actually growing! Now all my fussing over them, and putting them outside in the sun, and bringing them back in at night, and covering them with saran wrap is finally paying off!
Posted by maurinsky at 11:08 PM 1 comment:
Labels: vegetable garden

How does your garden grow?

Monkey and I are going to have a vegetable garden this year. I've been all talk on this subject in the past, but today, I mailed my soil sample to the UCONN Home & Garden Center, so they can let me know exactly how to improve my soil for veggie production, and yesterday evening, Monkey and I started our leeks.

leeks
asparagus (which is why we might have 5 beds, since they stay in the same place for 20 years)
peas
green beans
tomatoes
cucumbers
radishes
peppers
carrots
and probably a small herb garden

I am known to have a black thumb, so I'm going to rely on Monkey's youth and enthusiasm and experience helping our neighbors with their vegetable garden to get me through this. We're not bothering with zucchini because everyone and their brother grows that and we always seem to end up with a brown paper bag full of them when they are ripe. I hope to update with pictures, but my camera doesn't seem to want to let go of any of the pictures I take anymore, so that might not happen.
Posted by maurinsky at 12:59 PM 3 comments:
Labels: vegetable garden

and it was good.

This year is now approaching the speed of light, having surpassed the speed of sound roughly Wednesday evening, when I was singing - again - for the adorably pretentious students at the Hartt School of Music, who listen with their eyes closed as if the chorus had actually rehearsed and prepared extensively, with their Chairman Mao t-shirts and Che Guevara hats and their parents' old Volvos and BMWs waiting for them in the parking lot, while I have to climb into a crappy, beat-up Chevy Cavalier.

Sucks to be poor.

Not only has this year been fast, it has also been expensive, with car accidents and brakes and the insurance company continually denying coverage to my oldest, even though I've called them about it numerous times.

I haven't been home in a week, except to sleep, and I have an extra child coming to my house tonight, even though there is no food there. And I have to sing tomorrow, and then finally, finally a little break, a social event that I won't describe in detail since it is a surprise, but it will be so welcome to sit back and just gab.

Next question: why do I still feel lonely even though I'm always busy?
Posted by maurinsky at 4:57 PM 1 comment:

My a cappella group, Harmonious Soul, had a concert on Friday night, and it went really well. We had a good crowd, and I felt relaxed and energetic. I was so pleased to see so many of my friends and family in the audience, and I appreciated the kind comments of everyone after the concert. We had a recording mic set up, but we're not sure if our (volunteer) music board guy turned it on, so maybe we'll have a recording, maybe we won't.

My next event is next Sunday, when I'll be singing in the Women Composer's Festival Chorus at the Sisters of Saint Joseph in West Hartford, which is the start of the Women Composers Festival. I'll be singing in other events for the festival on the 11th, 13th and 15th. If you are interested in seeing Harmonious Soul perform, we will be singing at the A Cappella Concert on Friday, March 13th. We have a good set put together, of music composed by and/or arranged by women, including a couple of pieces arranged by one of our members.
Posted by maurinsky at 11:48 AM 5 comments:
Newer Posts Older Posts Home
Subscribe to: Posts (Atom)