This time, I think I caused my own sickness. I overmedicated because I had a tooth that was worrying me, and spent a day unable to keep down anything. So after Sio's lovely graduation, the following day I varied in between feeling like I was going to pass out, vomiting, and sleeping.

The rest of the weekend was pretty uneventful, but today, I decided to stop worrying about the tooth and went to the dentist. Turns out it was actually two teeth that were causing a problem, so I had two, count 'em, two root canals today! 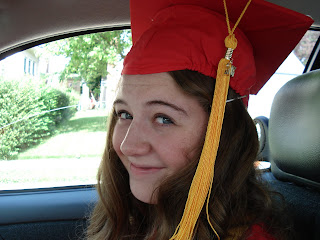 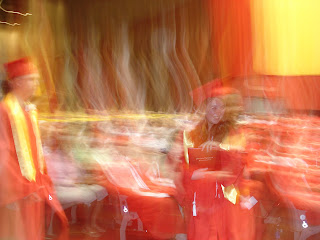 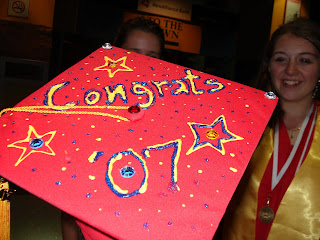 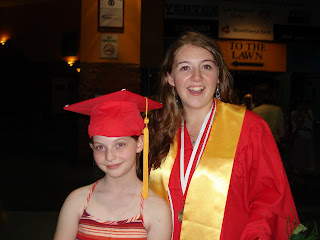 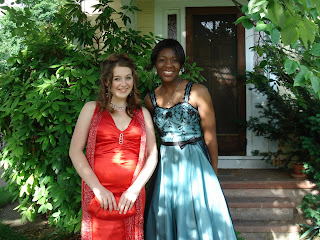 Sio had her senior prom on Saturday, this is her and her "date" Tosin. They both had awesome shoes and matching French pedicures: 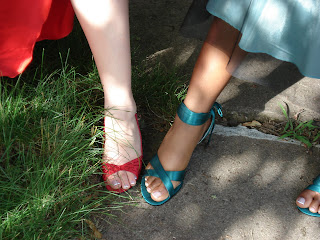 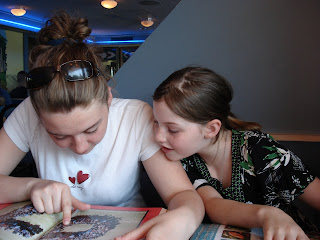 Of course today was Father's Day, and after a late start, we had a Father's Day breakfast at the Vernon Diner - here are Sio and Monkey picking Sio out of a picture of the senior class in her yearbook.

We got Loki two DVDs, Pan's Labrynth and Hero, but I knew what he really deserved for Father's Day: jugs 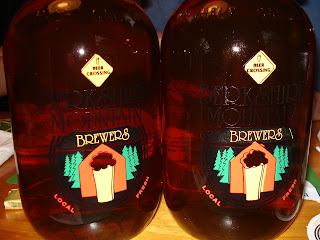 We drove up to the Barrington Brewery where Loki sampled three beers off their menu - Hopland, which was just as bitter as you would expect a beer of that name to be; Barrington Brown Ale, which was pretty mellow, and Black Bear, which had a whiskey-ish smell and taste, which is probably why it was my favorite of the three. (I only had a sample sip of each beer so Loki wouldn't have to drink by himself - my beverage was a Shandy Gaff (light beer, ginger ale, lime juice - girly beer is what we called it at our table). 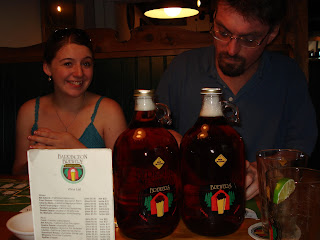 We had a nice meal there, too - Loki and I had cod sandwiches, Sio had chili, and Monkey had baked potato with bacon. Oh, and the best pickles, ever. I think this was probably our best Father's Day ever.
Posted by maurinsky at 1:03 AM 1 comment:
Labels: beer blogging, Father's Day, prom

One of my deepest regrets about having this gimpy leg is that I will never be a dancer. Since I can't dance, I do love to watch dance, and right now, I'm addicted to So You Think You Can Dance?

I didn't watch the first two seasons because I didn't even realize it was a show until this year. I'm not a big viewer of these competition shows. I love The Amazing Race because I love to see all the incredible places the teams get to go, but this is the only other competition type of show I watch.*

As a dance admiring non-dancer, I don't necessarily know what's good, but I know what I enjoy, and last night, my favorite pair of dancers were Sara and Jesus (aka Chuy):

Without Bob Fosse, there's no Wade Robson, but this was a really enjoyable piece of dance, and a terrific little piece of music from a movie I have on my Netflix queue but haven't seen yet.
Posted by maurinsky at 7:42 PM 1 comment:

I used to love all awards shows, but now I don't have the patience or desire to sit through them. However, I will make an excuse for the Tonies, even if (like this year) I didn't see any of the productions nominated.

Just a few brief observations: there is a certain kind of annoying voice that is popular on the Broadway stage. I caught Raul Esparza's performance of Being Alive, and I just dry heaved a little. So much effort, but so little feeling - or so much manufactured feeling and so little genuine feeling...I just didn't like his voice. I'm sure he's technically excellent and has studied for years, but between his ridiculously fast vibrato and his horrific pronunciations and the nasal quality of some of his notes, I was quite pleased he didn't win.

There is another kind of annoying voice that doesn't bother me so much, and Christine Ebersole presented that one in her performance from the musical Gray Gardens. Her voice cuts through anything, and you can understand everything she's singing, and she's singing in character. I've loved her for years, I'm glad she was encouraged with her win.

Re: Spring Awakenings....I don't feel qualified to make a judgement on this one. The songs I heard are kind of catchy, but....how do you say Rent in German? I didn't understand exactly what the snippets of songs I heard were about, and the use of hand mikes is jarring. I may be too old to appreciate this one.

Oh, the little introductions for upcoming numbers didn't work too well for me. Particularly the guy who introduced Gray Gardens - he was using a Boston accent to introduce a story that takes place in Long Island. And the guys from the Jersey Boys were behind the beat in the music, it was distracting.

Anyway, one thing I do love about the Tony Awards is the unabashed liberalism and all the uncloseted gays. William Goldman wrote a book in the late 60s (I think) called The Season, and one line I that he wrote was "there would be no theater without the Jews and the gays." (paraphrased). You could be forgiven for accepting that as absolute truth from watching the Tony Awards.
Posted by maurinsky at 12:20 AM 1 comment:
Labels: musicals, Tony Awards, what business do I have criticizing these people and yet...

Yesterday, we celebrated my niece Grace's 4th birthday, and my sister told us that Grace had recently been through pre-school screening. At the screening, Grace drew and colored in an apple, and the screener asked "what's that?"

The screener said "oh, it looks delicious! Can I have a bite?"

And Grace said "Okay, but it tastes like crayon."
Posted by maurinsky at 10:37 PM 1 comment:
Labels: funny, smart kid

So Paris Hilton served three whole days before the kindly sheriff sent her home with some new jewelry - an electronic monitoring device - because of medical issues.

Citing sources close to Hilton's family, the syndicated TV show Entertainment Tonight reported on its website that the health problem was a rash that she developed on her body.

I suppose its better that they keep herpes away from the general prison population.

But I was thinking about this story as I was reading over the love letters that the many friends and acquaintances of Scooter Libby sent to the judge. I kept reading that Scooter is a well-loved man, helpful to all, a man of the highest integrity. And I just couldn't quite figure out why that should give him a lower sentence. If anything, the leaders of society, the movers and shakers, the public servants - if anything, those pillars of the community who breach the public trust should get sentences even more severe.

I'm glad that Scooter got a hefty sentence - hopefully he won't develop a rash and have to serve his sentence at home, too. It would be just terrible if people got the idea that there is one justice system for the regular man, and another one for the wealthy and connected.
Posted by maurinsky at 10:15 PM 1 comment:

I was off the computer for the weekend while I searched the state of Connecticut for a car that I could afford, and I just found out today that Steve Gilliard of The News Blog passed away yesterday morning. My condolences to his family and friends, he will be missed.
Posted by maurinsky at 7:34 PM 1 comment:
Labels: loss, RIP

A doctor explains why he provides abortions.You must read this.
Posted by maurinsky at 10:06 AM 1 comment:
Labels: abortion
Newer Posts Older Posts Home
Subscribe to: Posts (Atom)